Malta, the Women of Wine visit the island06 November 2019Next 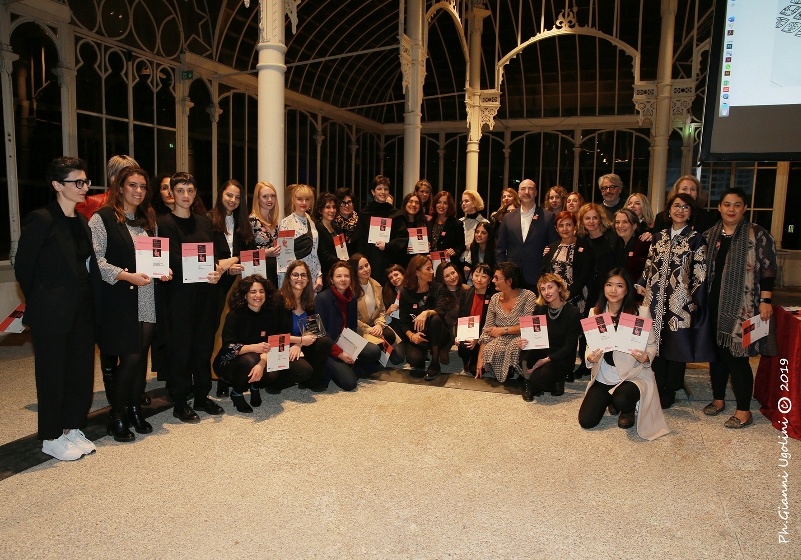 AWDA 2019 Fourth edition results: on November 8th, the closing ceremony of the fourth edition of the AWDA Aiap Women in Design Award took place in Florence, in the evocative setting of the Tepidarium del Roster

A day that was configured as a party, but also as an opportunity to discuss about the role of design and how this, through the oblique vision of women, can be configured as an agent of change.
The initial greetings from Laura Moretti, co-curator of the award, and Florentine doc, were followed by institutional greetings from the President of the Cultural Commission of the City of Florence, Fabio Giorgetti, an initial reflection by the president of Aiap Italian Association of Visual Communication Design and greetings from Johnathon Strebly, president elected of ico_D International Council of Design, institutional partner of AWDA.

This first short session, of due greetings was the prelude to the conference during which we had the honor to listen the brilliant speech of Alice Rawsthorn about the presence of women in design but especially about how the parameters of product design or other devices are still calibrated only on male models.
It was then possible to listen the role of the associations partner of the award, the Norwegian Grafill and the Indonesian ADGI through their respective delegates Maria Saetre and Zinnia Zinar.
We then had the opportunity to discuss gender issues in an interesting round table, chairman a young designer Bianca Sangalli Moretti, attended by design historian Raimonda Riccini prof. at the IUAV in Venice, researchers Francesco E. Guida of the Politecnico di Milano and Gianluca Camillini of the Free University of Bozen/Bolzano, as well as Maria Saetre, Zinnia Zinar, Nilam P Moeliono as well as Tortoioli Ricci and Jhonathon Strebly. The result is an interesting reflection that hopefully will produce concrete results for the forthcoming volume.
The day continued with the presentation of the projects and designers selected from the short list, who came from various countries around the world, from Japan to Norway, from Indonesia to Switzerland.
A great party, then, for all the selected designers and for the winners of the mentions and of the first prize that this year goes to Sylwia Bartoszewska, a very young Polish designer.

AWDA 2019
AWDA provides a special prize for career or memory, in addition to the mentions in the three categories of participation, awarded by the curators. The special award is aimed at women designers who have distinguished themselves in their lives for their professional achievements, for their reflections and for their contribution to the dissemination of design culture.

CAREER AWARD FOR HISTORIC ACHIEVEMENT
Claudia Morgagni
(Milano, 1928-2002) Italy
Claudia Morgagni receives the lifetime achievement as a acknowledgement of the figure of a graphic designer, an artist, a teacher, a mother, a woman who knew how to combine her different roles, her different interests, her passions, her skills and inclinations affirming with determination and perseverance, in an era when it was not at all simple, their professionalism and their way of interpreting it. Claudia Morgagni can be a reference model for designers and women, today and tomorrow.

AWDA 2019
LIFETIME ACHIEVEMENT AWARD
Lora Lamm
(Arosa, 1928) Switzerland
Lora Lamm receives the career award for having built a language that was born in the rigors of the Swiss school to become a strongly characterized and authoritative system, dominated by simple forms, color, illustration. Marked by a “thoughtful lightness”, she was able to describe, through an incisive communicative ability, the transformation of women and their emancipation, including that of graphic designers, of which she is one of the few examples recognized into the Graphic Design History.

FIRST PRIZE  AWDA 2019
Designer
Sylwia Bartoszewska
Project
THE VISUAL IMAGINARY OF THE POLISH NATIONAL PARKS
Design should not only be a professional activity, but also a cultural tool and a way of placing oneself in everyday life. The project receives the first prize ever for its ability to delve into a seemingly simple theme that goes beyond mere functional aspects.

3 Honorauble mention one for each categories

Designer
Carlotta Origoni
Project
THE VEIL IS SEEN ONLY WHEN IT IS LIFTED
The project receives an honourable mention for having had the ability to transfer complex content into an analog artifact that contains a high level of interactivity.

Designer
Orith Kolodny
Project
199 DRAPEAUX – FORMES, COULEURS ET MOTIFS
Orith Kolodny receives the honourable mention for the PhD, Researchers and Teachers Category for having developed a project that goes far beyond the graphic reading of the flags of the world, broken down into a taxonomic system of shapes and colors, in search of those minimum common multiples that unite and do not distinguish the emblems of each national identity. Finally, the project is transformed into an unusual atlas to read and look at.

Honourable Mention
Students Category
Designer
Laura Simonati
Project
UNFOLDING BRUSSELS. COLONIAL TRACES IN THE PUBLIC SPACE
Through a simple mechanism, that of tearing the pages, the gesture becomes metaphorical in showing the opposite situation between the two countries: Brussels and the Congo.

Designers
Svanhild Vindenes Egge
Maria Bono
Project
DIGITAL REPORTS FOR THE OFFICE OF THE AUDITOR GENERAL OF NORWAY
The project is the classic example, not at all obvious, nor usual, of how design is at the service of the community, worthy for the enlightened client – a government that uses the tools of design – and worthy for the project itself that without falling into unnecessary decorativism becomes the instrument of access to information for individual citizens.

Designer
Tricia Treacy
Project
SLOT
Tricia Treacy receives special mention for the PhD, Researchers and Teachers Category. The acknowledgment, strongly requested by the jury, goes to the project for having been able to synthesize, in a visually contemporary way, a process of participatory construction of sense, experience, and identity. A project marked in every phase by experimentation as well as by the completeness of the process implemented.

Designer
Joy Gloria Harendza
Project
JAGOAN SOCIAL CAMPAIGN
A complex theme, that of harassment of women, faced with courage and irony, through a measured use of youth languages.
Special Mention
Students Category

Designer
Maryam Helida
Project
GUIDEBOOKS: HERITAGE EXPLORING OF TERNATE
A project of identity that does not fall into folkloristic languages but uses a chromatic system and pictograms in line with the international languages of design.

Along with the curators, Cinzia Ferrara, Laura Moretti, Carla Palladino, Daniela Piscitelli, have been present among others:

The event is co-promoted by the Città di Firenze within the Festival dei Diritti / Festival of Rights.

Donne del Vino FVG in Trieste at the Forum "The Fr

The sommelier Patrizia Foltran is the new delegate

Thanks to Rebecca Wang who dedicates us a wonderfu

This website uses cookies to improve your experience while you navigate through the website. Out of these, the cookies that are categorized as necessary are stored on your browser as they are essential for the working of basic functionalities of the website. We also use third-party cookies that help us analyze and understand how you use this website. These cookies will be stored in your browser only with your consent. You also have the option to opt-out of these cookies. But opting out of some of these cookies may affect your browsing experience.
SAVE & ACCEPT
Questo sito utilizza cookie per migliorare l'esperienza degli utenti.OkLeggi di più