Lower salaries, few children and often victims of sexism: the identikit of Women in Wine in the new millennium

Lower salaries, few children and often victims of sexism: the identikit of Women in Wine in the new millennium

23 January 2017in The Associates/People 0 Comments 0 Likes 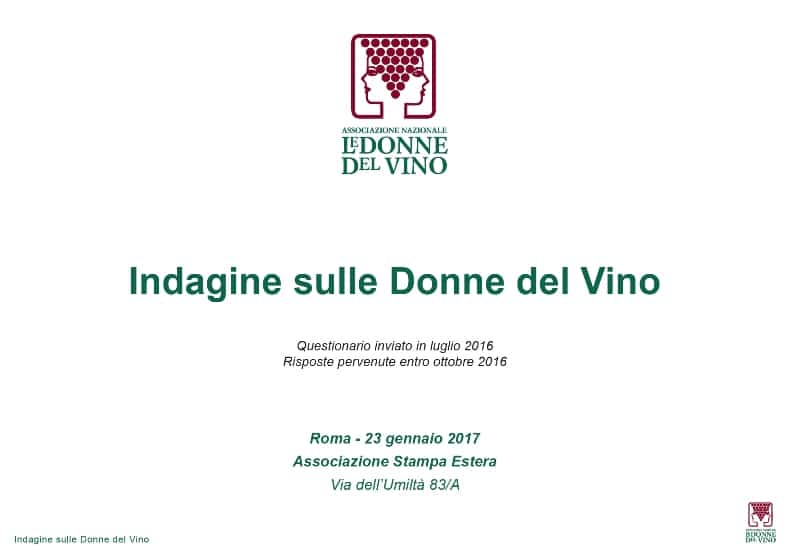 They have college degrees, they have children after age 30, they often make less than men, and they are still up against it when it comes to sexism. This is the portrait of a Woman of Wine in the new millennium, the result of a survey performed by the National Association of the Women of Wine (Associazione nazionale Le Donne del Vino) presented in Rome at the conference room of the Foreign Press. This study will be a part of the worldwide investigation conducted by Wine Business International, the prestigious international wine trade journal, read in over 40 countries.

“The 2016 poll done by the Women of Wine (Donne del vino) reveals the new profile of the world of Italian wine as experienced by women. Some points were confirmed, some were surprises, especially regarding more sexism than we expected,” comments the National President of the Association, Donatella Cinelli Colombini. Present with her were Gabriele Micozzi, Professor of Marketing at the LUISS Business School, and Alfredo Tesio, coordinator of the Gruppo del Gusto (Food & Wine journalists) of the Foreign Press. The questionnaire was sent during the past few months, and 24% of the members responded, including women wine producers, journalists, experts, wine shop owners, and restaurateurs from all over Italy. “There is absolute agreement on two points,” the President observes. “The role of women in the world of wine is improving, but it is still not great, and there is still a lot to be done to reach real gender equality. Moreover, women take their cue from other women who are their models (82%). This is an element not to be underestimated, because recent inquiries of Wine Economics into the Australian women in wine instead detected that there was a tendency of women in the sector to conform to male behaviors both professionally and socially, to adapt to an environment that sees them as clear-cut minority. Micozzi disclosed research that he is conducting on the psychological differences between men and women: “I am analyzing the comfort zone of the brain that differentiates the way women think from the way men think. The ability of the mind to provoke, the activities in which a woman gets involved and those in which men get involved, the different forms of intelligence: radar for women, a tunnel for men, the speed of thought that today is much more developed in women.” The research will be presented at Vinitaly in April.

Let’s see in detail how the women interviewed responded:

A decidedly high level of education is confirmed, with 43% of those responding possessing at least a college degree, and 15% have an advanced degree. Surprising instead is the difficulty of reconciling professional commitments with the birth of children. The Women of Wine producers are 88% either owner or co-owner of the wineries they work in, but they have to put off having children for a considerable amount of time; thus, half of those between the age of 40 and 50 still have minor children. A different view of that idyllic image in the bucolic world of wine, where people think everything is ‘people-oriented’, and where instead the pace of work and professional commitments means spending time far from home. The resulting situation is not conducive to family dynamics and thus, the role of wine producer is similar to other high profile jobs. 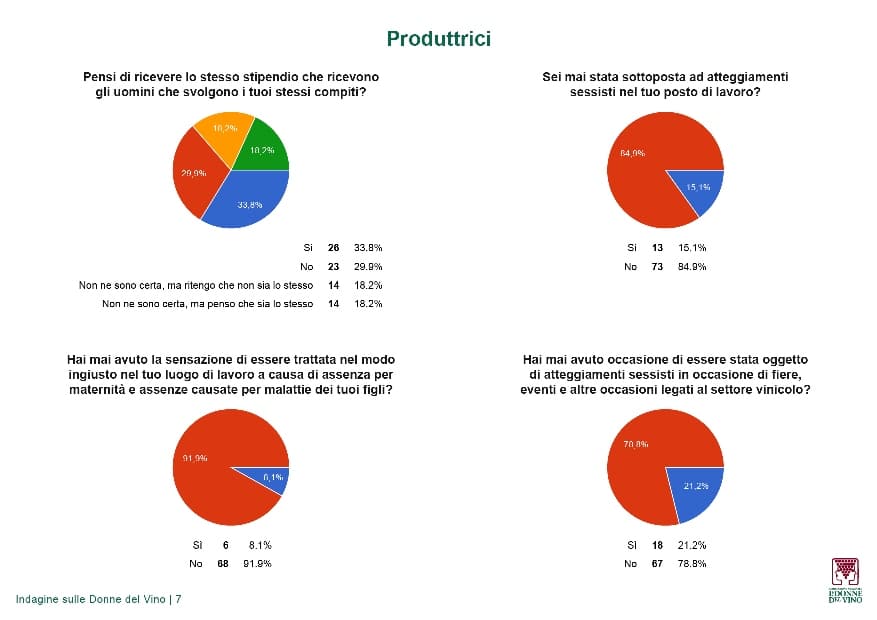 It bears underscoring that none of the producers interviewed said she was retired, even though 19% of them were over 60 years of age. Evidently, giving up work is a possibility that is not contemplated for women who have their own companies. In this study, 42% are small wineries with a sales volume of less than half a million euros; only 17% reach a volume of a million euros, and 41% surpasses that benchmark.

Despite a small company dimension that could create limits, all the women producers export quite a bit of their product. A good 52% earn over half of their profits in the foreign markets. The data about the amount of wine produced that has a regulated appellation – 69% of the total – shows an orientation toward quality. Quality and drive are attitudes that are confirmed by the product diversification: 85% of the Women of Wine have diversified their offer, representing over one third of the company’s business. Of the producers responding, 21% have restaurants as part of their company and 30% offer hospitality (hotel, bed-and-breakfast, etc.). Practically everyone has direct sales at the winery (91%), and many are interested in the environment, thus 27% produce organic or biodynamic wines.

The most surprising parts of the inquiry regard the section that will become part of a worldwide study conducted by Wine Business International – the well-known agency that analyzes the world of wine  – about the condition of women in the sector. This is something courageous and never before analyzed.

When asked if they thought they received the same salary as men doing the same job, 29.9% replied ‘no’, and 18% ‘maybe not’, even though, as stated above, it was principally the owners of wineries who responded. These same respondents affirmed that 96% of the time they compensated male and female workers at the same rate. For the same reason, it is not surprising that the question about sexist attitudes or discrimination received almost a complete ‘no’ (85%) even though there were those who “insulted for not submitting to the boss” and who admitted that “women continue to work twice as hard even to emerge in the family company where they are co-owners with men.” More problematic is the situation at wine fairs where 21% of the producers have had to defend themselves from male attacks or combat a sexist attitude.

The scenario worsens when it is women who are employed by others to respond, such as women working in wine shops or sommeliers. In 63% of the cases, they are certain or strongly suspect that they earn less than male colleagues, but in choosing their current position, they favored companies where the gender difference was less.

A good 75% of them have college degrees or advanced degrees, and while 50% of them are under 39 years old, the majority of them do not have children. This is an indication of a real problem in reconciling career commitments to family commitments, even when holding a full time job. 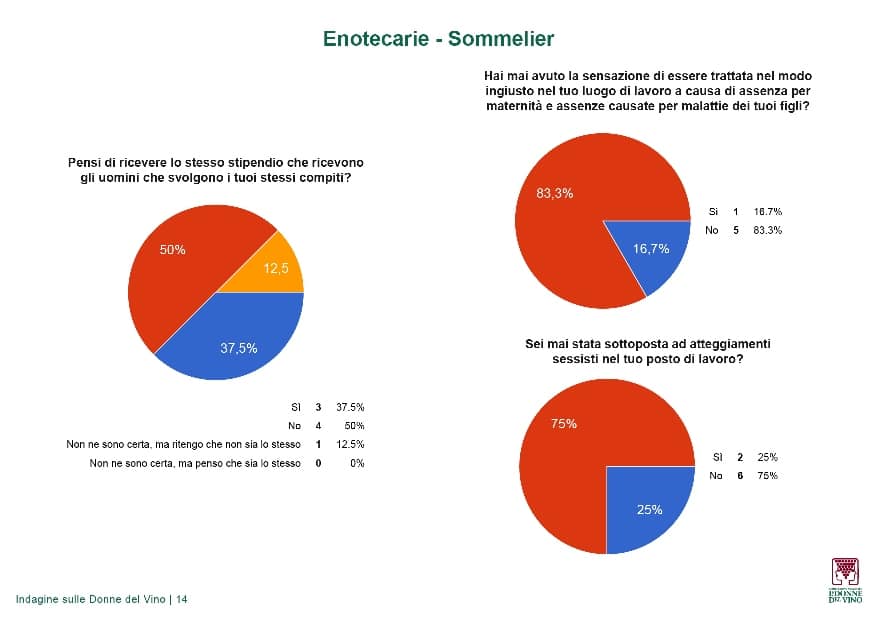 Less educated than their fellow members (33% have a college degree or advanced degree) and with the great majority over-50 years old (72%), women restaurateurs replying to the inquiry were overwhelmingly the owners of their business and among the Women of Wine those who experienced the least gender-related problems. 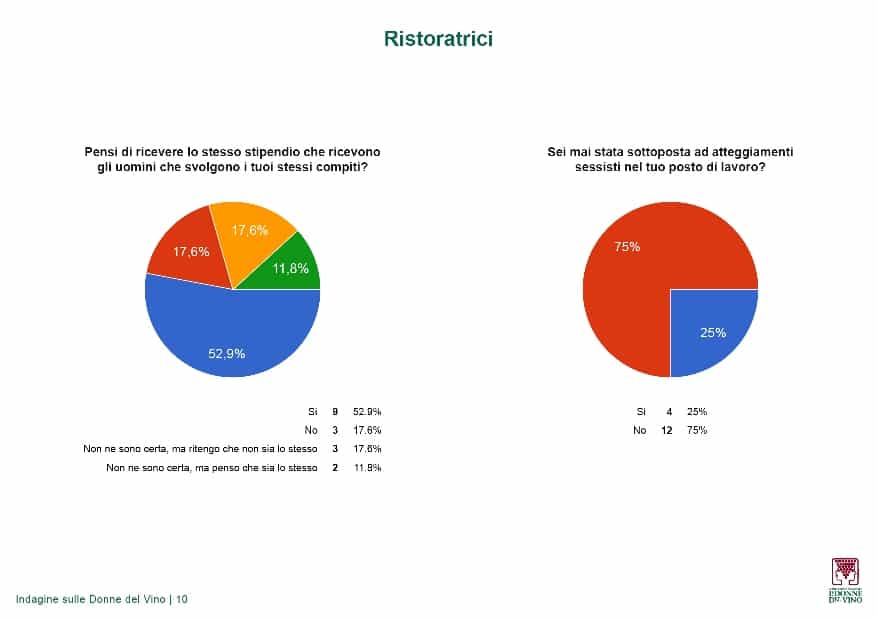 On the opposite side we find the journalists, PR and marketing people, consultants and experts. The age group of the respondents was concentrated between 40 and 59 years old (63%) and the educational level is very high with 66% in possession of a college degree or advanced degree. The doubt or certainty of being paid less than male colleagues is also higher (62%). There are even those who admit that where they worked previously women were ‘not allowed’ to hold high level positions in the company because they were not considered ‘suitable.’ 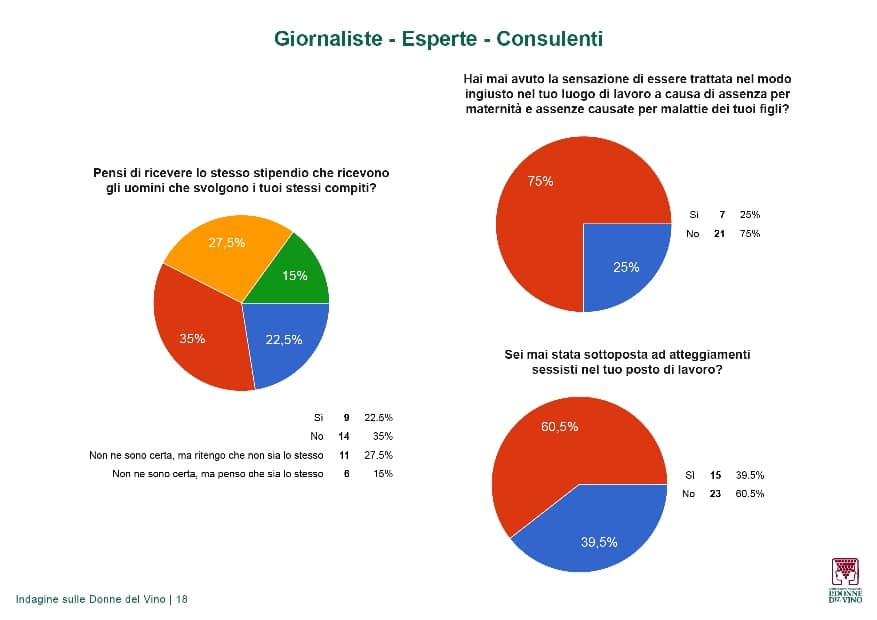 25% of those responding suffered problems when they became mothers; in one case there was even a dismissal.  39% had to defend themselves from sexist attitudes, from half-serious joking around, like “less lipstick and less Armani would help your career,” to arrogant discrimination, such as “my very famous bosses always mistook me for the maid,” or even explicit requests for sexual favors that if not performed would mean no paycheck. Even for journalists and PR people, the wine fairs are a delicate moment in which the probability of being pestered increases dramatically, just like the feeling of being considered less for the sole fact of being a woman. Hence the reaction of striking out on one’s own to be self-employed, and 73% of the Women of Wine responding created their own company, often very small (in 39% of the cases, less than 100,000 euros in sales per year).

Confirmations and surprises also about the women consumers of wine, who were polled through interviews with restaurants, wine shops and sommeliers. All estimate women wine lovers to be on the rise in terms of quantity and quality, also for the fact that it is no longer considered unseemly for a woman to be seen in public with a wineglass in her hand. In restaurants, women are having their say in choosing the wine when in a couple, while when there is a group, it is more often a man who decides. At the table, women’s choices tend to be for whites, or sparkling wines. Women consumers tend to choose based on personal taste and the name of the producer, because in the great majority of cases they choose a brand they know. 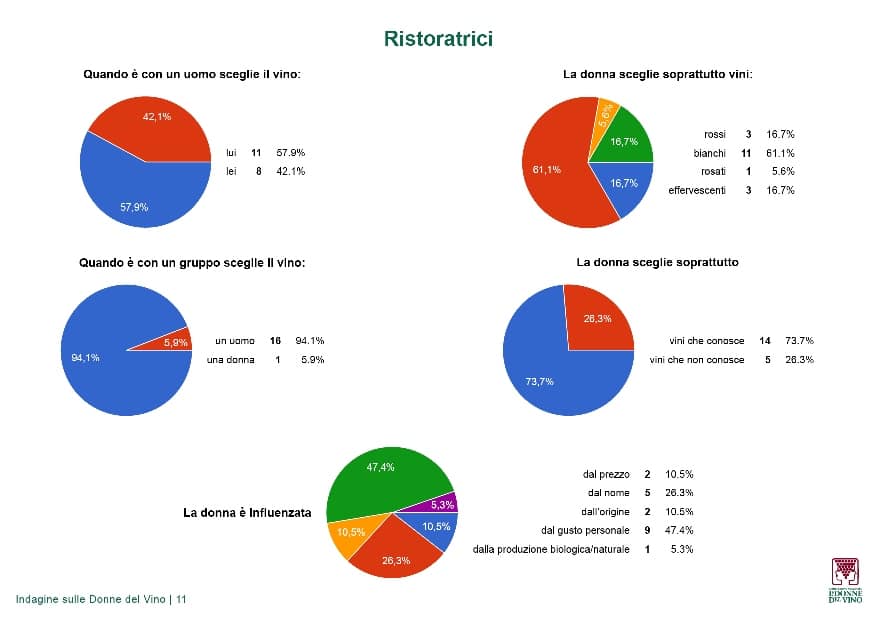 The Women of Wine (Le Donne del Vino) is a non-profit association that has the mission of promoting the culture of wine and the role of women throughout the phases of production of wine. Established in 1988, today it counts 750 members who are producers, restaurateurs, wine shop owners, sommeliers and journalists.